The video overview below, hosted by Lighthouse Research & Advisory’s Chief Research Officer Ben Eubanks, dives into our brand new research, offering a peek at just how much is wrong about what we’re hearing in the news and why we need to be looking at this problem in a different way.

Some of our brand new data looks at what everybody’s calling the great resignation, but what the data actually show is The Great Reprioritization, with people looking at different things that they want from work, different priorities, and resetting the things that matter to them. So I’m going to share some of those with you very briefly and let you understand just how this is actually playing out.

Average as a Math Term, not a Human Term

So they began to think that maybe the pilots were a different size than the pilots who the planes were built around originally–after all, pilot error is often cited as the reason for a crash or problem in midair. So the Air Force assigned a team to measure all of the pilots: their height, the length of their thumbs, the circumference of their neck, the size of their boots, all the things you can possibly imagine around the size of a person–literally hundreds of measurements.

And then they averaged those together. Okay: so the average person is between this much and that much tall, they have this big of a boot size, they have this long of an arm, etc.

But one of the researchers said, I wonder how many of our pilots are actually in that range. So he went through and he looked at all the data.

And for thousands of pilots, there were exactly zero who hit the mark on all the ranges the Air Force identified as “average.” So when he pulled that back to just three measurements, just three specific ones, and he started actually measuring the pilots on those, he found that the percentage of them were in the single digits that hit average on just those three metrics.

That’s a reminder that what you’re going to see in the data is that this is not a human discussion. Average is a math thing. It’s not a human thing.

That’s one of the biggest reasons we started this research is because when someone says 50, 60, 70% of your people are going to turn over, the questions we’re getting from our advisory board and other HR and talent executives we’re talking to in our research, the question is okay, but which ones are going to leave?

Getting into the Data: Intent to Stay/Leave

So we got into this to break it down and make it more actionable. And that’s when we started finding some of these really intriguing things.

So a couple of stats from the study, just to give you some insight here in the data, 2000 workers that are currently employed:

About a third of people said I’m going to be quitting sometime soon, but I want to show you that those aren’t people that are just committed to quitting, no matter what, we have an option to save them, to retain them, to keep them.

So we break the groups out and start looking at them by different reasons. The groups has said they’ve already quit their job. The biggest reason was stress and burnout. Interesting because we keep hearing the news that the reason people quit is because they want remote work. And that is in the top 10.

Absolutely. That is a priority for many people, but it’s different than what you might expect. What I share in a just a minute will break what you think you know about people’s interest in remote work. In addition to that, people that quit said, I got a better job or I got a higher pay/offer. We’re hearing salary inflation conversations happening regularly.

And then last in the top three is: I didn’t like the company. Their policies, their leadership, the things that they’re doing. Respondents didn’t agree with those things.

So these are the top three reasons people have already quit a job, but watch this. That’s what we see. The reasons they quit. They’re on the left. Let’s compare those with the things we asked that audience, what would make you stay? What would make you want stick around? All right, the top one better pay and benefits. 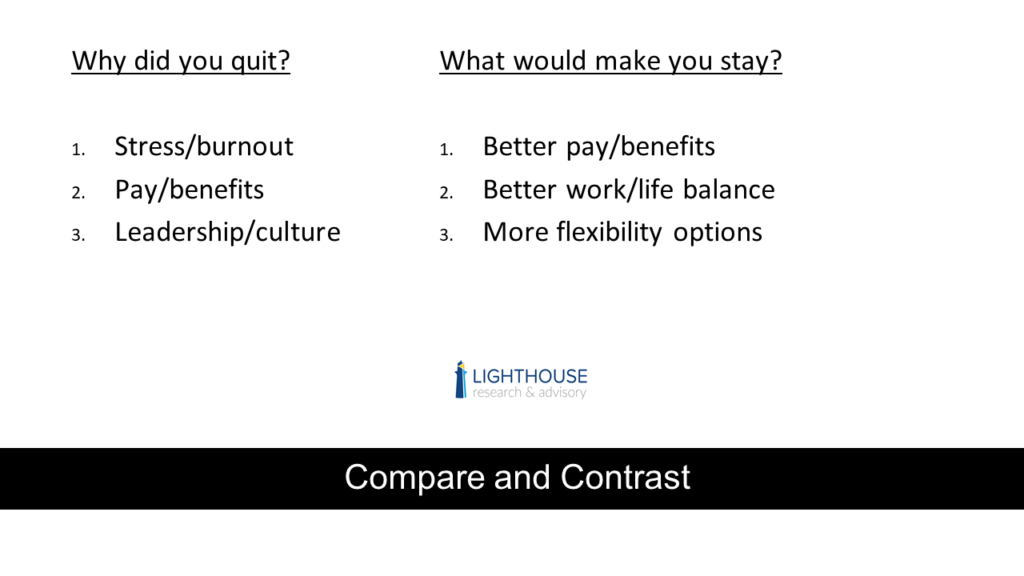 I want people to appreciate me and support me for who I am and what I bring to the table. Better work-life balance. That’s going to show up more in a little bit, and then we saw more flexibility options. So yes, flexibility is there, but it’s not just remote work. Flexibility can also be incorporated in other ways.

We wrote a piece on this in the blog week or two ago around how to incorporate flexibility into non-flexible jobs, companies, and industries. So there’s lots of things around flexibility that we think we know. But when you ask your people, you’ll actually find out what it means to them.

And you might find out that flexibility doesn’t mean “I want to work for my couch in my pajamas.” It could mean “I really want to be able to swap shifts with someone else without having a manager approval.” Or “I’d like to be able to do X instead of Y.” And it might be something very simple and within reach for you as an organization that doesn’t cost you anything, but it allows you to support and keep some of your people.

We asked what matters most in a job, and that’s when we see this thing start shifting around. We saw some of these things in other areas, but we’re back to work/life balance to support myself and my family, my social needs. That was the number one thing that popped out here in the data.

Why Compensation is Becoming a Bigger Issue

Number two was comp. I want to get paid well and to get paid fairly. And again, that conversation in the past compensation has always been a smaller part of the discussion, but today it’s a bigger part just because people and organizations are making bigger and more lucrative offers because they are such and such a struggle on talent.

Whereas compensation might not have been at the top. Okay. Before this, if you’re getting an offer for up to twice as what you’re making now, people are not going to walk away from that without serious consideration. And the one that intrigued me was relationships. And in a minute, I’m going to show you these things as it breaks out by age, because you’ll start to see what I started off the story earlier about average is a math term and not a human term. If I tell you that these three are the most important, and you go forward with this, you’re going to fail.

We have to realize that we’re serving different groups and populations in the workforce differently because they are truly different. Let me give you an example of that. I shared this on a recent speaking event because it helps to paint this picture. This is a breakout by gender. We asked people in this survey, if you accepted a job, how long would you consider other offers?

How Men and Women Differ on Openness to Job Offers 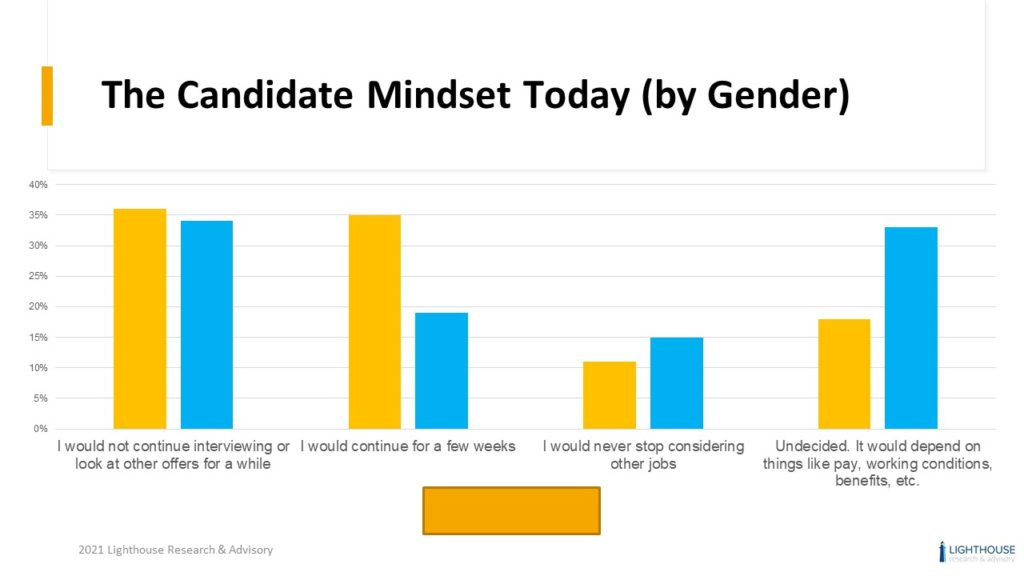 The spectrum goes from “I would not interview for a while” all the way to “I’m always open to the right offer.” You see here two different groups. One of these is men. One of them is women. And so thinking in your head, which one do you think does this, for example, this third column here, right? I never stopped considering other jobs or the fourth column, which group is always going to be open to the right offer?

Interestingly enough, the blue represents women in this set of responses. Then men are gold.

I’m going to be honest with you. I would have expected the blue to be the men, saying, “I’m never going to be tied down. I’m always gonna be looking for my options.”

But when I shared this data with a female executive recently, she said, “Obviously!” I asked what she meant, and she said, “Obviously this is the truth, because if someone’s going to appreciate me and make an offer based on my real value and suddenly care about what I have to bring to the table as a woman, I’m always going to be open to that.”

That’s a perspective that she shared and I completely agree. And it’s probably a big reason that women responded that way in this research–they are finally getting the appreciation and value they deserve.

What the News Headlines Get Wrong about Remote Work

If we look at the news, if we listened to the headlines, this is what we’ve been told: there’s 1% of people that want to work in a physical location and the other 99% want to be working remotely. 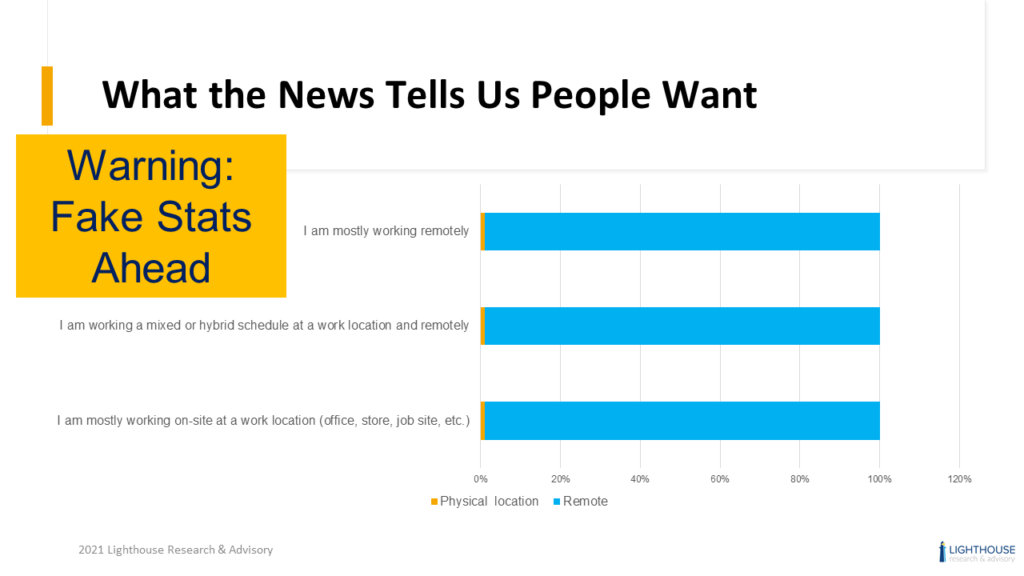 That’s what we keep hearing. But one of the questions we asked is where are you working? What is your current relationship with work? Are you remote hybrid or onsite? We asked that question and then we ask them how they want to work.

And here’s what happened:

If you’re working remotely now, does everyone in that group want to continue? No, but the same is true for every piece of this puzzle. This is a clear reminder that we can’t set this “peanut butter spread,” everyone gets the same thing kind of approach and assume everyone’s going to be happy with that.

So we looked at the different age brackets where people are, and we asked them about the top priorities for them at work. When we started breaking that out, you see it start to change and shift. For 18 to 24 year olds, those top two or a complete tie in the data. Exactly the same number of people said those, which is surprising relationships at work and their work life balance are most important to them for a 25 to 34 year old. They prioritize work-life balance, but then lean into compensation. 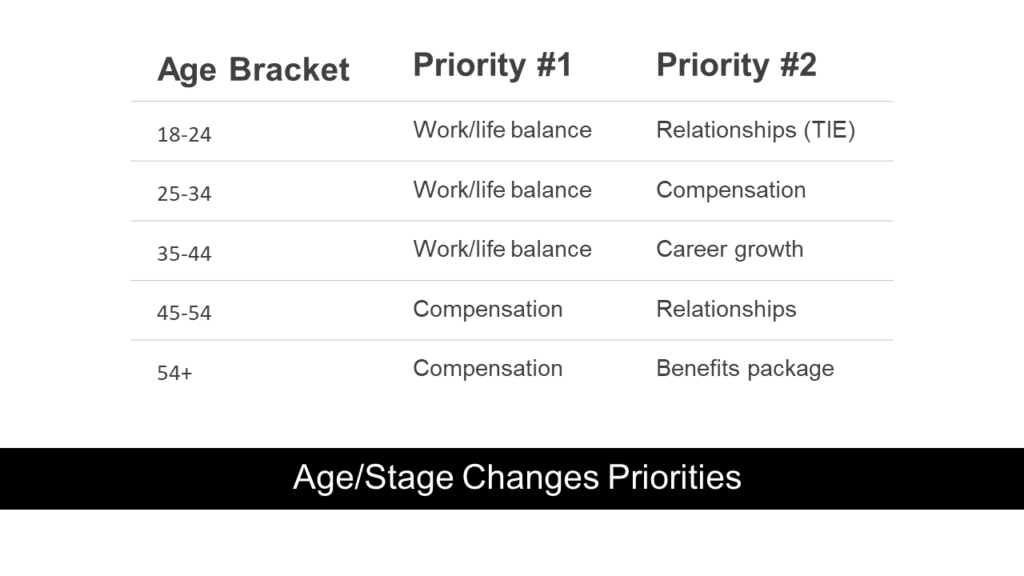 And so on, on this list, I don’t have to read it off to you, but you understand how these things start to change.

Please note: there’s not a single group. There is not a single pairing of age bands that has exactly the same priorities as another. Some of them have the same top priority, but by priority number two, none of them match.

I’m sharing this data because we see an opportunity for employers to really get to the personal, human level. We can get to the individual level and serve our people where they are. It starts with asking questions. It starts with connecting with them.